Time to break out the champagne! Uganda’s archaic sedition law has finally been scrapped, in a much awaited decision made today by the Constitutional Court. This means that a number of Uganda’s journalists will have court cases and charges dropped (though many other charges still remain). Among them include those who have been charged with sedition for likening the Museveni regime to that of Ferdinand Marcos, for discussing Uganda’s role in  the death of John Garang, and for discussing Uganda’s role in the July 11 Kampala bomb attacks, among many others.

The petition to the Constitutional Court on the issue was originally filed in 2005 by the Independent’s Andrew Mwenda (formerly of the Daily Monitor), who was quoted today by AFP saying of the ruling, “Today is not just a good day for journalists. It is a good day for all Ugandans.”

“Uganda’s past elections have been marred by reports of fraud, intimidation, and politically motivated prosecutions of opposition candidates. If these upcoming elections follow that same pattern or worse, it will put the United States and our relationship with Kampala in a very difficult position. We might have to consider restrictions to our assistance and limiting our engagement with Uganda’s security forces.”

That is U.S. Senator Russ Feingold writing in today’s Daily Monitor. While the political process is by no means completely free or fair, and while journalists regularly report to the Orwellian titled Media Crimes Department of CID (Criminal Investigations Department), I find Mr. Feingold’s op-ed pretentious.

“Divisions and upheaval surrounding February’s elections could undermine the country’s unity and potentially its stability. It could also weaken the government’s international reputation and partnerships. Therefore, it is critical that the government take steps now to build public trust in the election process and the country’s democratic institutions. As a true friend to Uganda, [USA] should press them to take these steps and provide support as appropriate. The stakes are too high to ignore these issues.”

I think many Ugandans are quite aware of the high stakes. Living through decades of political upheaval and violence, which occasionally still rears its ugly head, leaves memories and losses that are not easily forgotten. In any case, people certainly do not need a U.S. senator to tell them how high the stakes are in their own country. Feingold’s thinly veiled threat to pull back U.S. military support of the UPDF is more likely to annoy the country’s leaders than send them running for political reforms. I do not disagree with the substantive points he raises, but his words come across as those of a parent warning his rebellious teenager that bad behavior will result in an a reduction of pocket money. And that’s annoying.

This killing follows the shooting of Lt. Gen. Kayumba Nyamwasa in South Africa last week, and came just one day before today’s reburial of genocide victims in Uganda.

The Committee to Protect Journalists discusses the exodus of East African journalists here.

to blogging that is. You can reach him for comments and questions at amwenda@independent.co.ug

I am sure the Rwandan government will be blasted for their recent suspension of BBC broadcasts in Kinyarwanda, accused of being authoritarian and repressive. But before anyone jumps to conclusions I would like to see what was actually said, specifically by Faustin Twagiramungu, the former Prime Minister who now lives in exile in Belgium.

This is as much as I could glean, as reported by the AFP:

During the programme, Radio Rwanda said, former prime minister Faustin Twagiramungu, who now lives in exile in Belgium, said that as a Hutu, he could never give in to Tutsi demands to apologize for the 1994 genocide.

The government had this to say of the situation:

“We have suspended all BBC programmes in Kinyarwanda because they had become a real poison with regards to the reconciliation of the Rwandan people,” Information Minister Louise Mushikiwabo told AFP.

“We could no longer tolerate that,” she said. “The Rwandan government shall protest strongly, until the BBC can give us guarantees of responsible journalism.”

The editorial in Rwanda’s New Times comes down hard on both the BBC and the international community, concluding:

Even as we prepare to celebrate World Press Freedom Day, under the broader theme to do with the role of media in national reconciliation, the behavior by the BBC in Rwanda leaves us with much to ponder on.

Rwanda has every right to take exception when her history and efforts at moving on through reconciliation are insulted. Just like any other country reserves that right.

In Germany those who deny the Holocaust face judicial processes. Dutch politician Geert Wilder was banned in London and indicted in Holland for his radical anti-Islam views.

As I have mentioned before, those who discuss Rwanda are often polarized, either adoring or despising the government of Paul Kagame, and I think both sides are too quick to judge. Whether the response of the government in this case was an overreaction is impossible to debate (much less determine) without knowing what was being said on that particular show, and without fully understanding the social and political climate in Rwanda today.

“This suspension of the BBC reflects the Rwandan government’s growing crackdown on free speech,” said Georgette Gagnon, Africa director at Human Rights Watch. “If Rwanda is truly committed to the fundamental right of free expression, it should allow differing viewpoints on genocide issues and related government policies.”

Meanwhile, just to demonstrate the degree of this polarization, on the adoring side we have Pastor Rick Warren, who has just nominated Paul Kagame as one of TIME magazine’s 100 Most Influential People, gushing:

Kagame’s leadership includes a number of uncommon characteristics: One is his willingness to listen and learn from to those who oppose him, and even find ways to partner with them.

When Stephen Kinzer was writing a biography of Kagame, the president gave him a list of his critics and suggested that Kinzer could discover what the president was really like by interviewing them. Only a humble, yet confident, leader would do that.

Another uncommon characteristic is Kagame’s zero tolerance for corruption. Rwanda is one of few countries where I’ve never been asked for a bribe. Anytime a government worker is caught in corruption, he is publicly exposed and dealt with. It is a model for the entire country – and the rest of the world too.

So the debate continues…

Starting a conversation about Rwanda is like a box of chocolates, you never know what you’re gonna get. Observers of the small East African nation are often polarized in their views of the country’s governance — either President Paul Kagame is an inspirational genius getting things done in a country that was hacking itself to death just 15 years ago, or he is a brutal dictator, quashing the opposition, press and anyone else who threatens his power or so much as mentions the words “Hutu” or “Tutsi”. Whichever side you take, it is nearly impossible to talk about Rwanda without talking about Kagame. Because for many, Kagame = Rwanda (which is not to suggest that this is the way he would want to be perceived).

During the 15 year commemoration/remembrance of the 1994 Rwanda genocide last week, there were a flurry of articles and blog posts written on the subject, some applauding and others criticizing Rwanda’s current government. You could almost wonder if you were reading about the same country while reading two articles like VOA’s “Rwanda Gacaca Criticized as Unfair for Genocide Trials“, and then “Rwanda 15 Years On” by Josh Ruxin, director of Rwanda Works and Columbia University public health expert.

Meanwhile, human rights organizations have also been hard at work to publicize their own assessments. Human Rights Watched published a news story last week titled, “The Power of Horror in Rwanda” in the Los Angeles Times and lists many more country reports here. In their 2008 Annual Report on Rwanda, Reporters Without Borders wrote: “Appalling relations persisted between the government and a section of the independent press, especially the more highly critical publications…”

What I have experienced first-hand is Rwanda (and specifically Kigali) today. I have visited government officials in their brand new office buildings, I have driven (been driven) on smooth roads, I have run on clean sidewalks and walked alone at night without fear, I have seen how patients are treated with care (and medicine…and new machines) in Kigali’s main referral hospital, I have met with investors and seen plans and blueprints for beautiful hotels and resorts around Rwanda. And I was impressed by it all.

This is not to say that everything in Rwanda is hunky dory everywhere all the time. Rwanda is a very poor country, with fewer resources and human capacity than Uganda, Kenya or Tanzania (in fact the country is soaking up talent from all over the world in its hospitals, universities, etc). Many people are concerned about what will happen in the next 5 or 10 years. They wonder whether Kagame will step down, or if he will become like so many African leaders before him, refusing to relinquish power. Being the optimistic person that I am, I of course am leaning towards the former. But these are critical years for Rwanda. These are the years in which systems, institutions, and capacity must be built if peace and development are to continue in an era post-Kagame or even post-RPF.

What I can say is that it is almost impossible (if not entirely impossible) to put oneself in Kagame’s shoes. He has and will make mistakes, as any leader will do. But I think as outside observers to Rwanda’s development we should ensure that in being critical, we are not unwittingly being hypocritical instead. 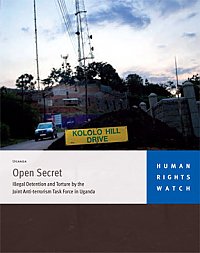 Torture has been a sensitive subject for the government of Uganda, and has led to the arrest of journalists who cover the topic. Human Rights Watch today released their 89-page report, “Open Secret: Illegal Detention and Torture by the Joint Anti-Terrorism Task Force in Uganda.”

An article highlighting information related to the killing of four suspects can be found here.

A summary of the report, published in the Daily Monitor, is below:

The Human Rights Watch will today release a report in which the Joint Anti-Terrorism Task Force (JATT), an arm of the Chieftaincy of Military Intelligence, is expected to be accused of wide-scale use of torture and illegal detention of suspects. The report is expected to put the government’s rights record in the spotlight.

Conducted between August 2008 and February 2009, the report lies on testimonies from former detainees.
This won’t be the first time the rights body takes issue with the government on abuse of human rights and freedoms.

Past reports have accused the government of torture, questioned transparency of security agencies and general transgression on the rule of law.

The last human rights report condemned the 2006 election violence, intimidation of the Opposition and raised concerns of fairness ahead of the 2011 elections.

PresOur offices at The Independent in Kamwokya, Kampala were again raided yesterday, and this time three journalists arrested — Andrew Mwenda, Charles Bichachi, and John Njoroge. Andrew was literally kidnapped as he was leaving his house — surrounded by five security operative vehicles, removed at gunpoint from his car, and handcuffed. All three were taken to police headquarters in Kibuli, Kampala and held for several hours. Meanwhile The Independent offices were raided and searched by a number of security operatives, and all phones of staff members were confiscated. Three computers were taken, as were flash drives and other documents suspected as “seditious” material. Andrew and the others have been charged with sedition and defamation, as a result of publishing two articles, one on Maj. Gen. Kazini and one on torture in Uganda as told by a former UPDF soldier. The following are national and international accounts of the event: