A few links for your Sunday: 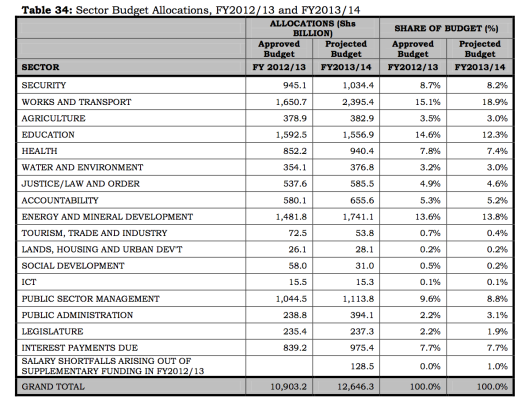 Looks like we are focusing on physical capital at the expense of human capital. Will it pay off?

On Tuesday, Nigerian president Goodluck Jonathan declared a state of emergency in three northeastern states, Borno, Yobe, and Adamawa. Raids by the Nigerian army have started in Borno, targeting Boko Haram. Boko Haram has killed over 1000 people since launching their insurgency in 2009, but as the figure above shows, the Nigerian army has been complicit in many killings as well. The Council on Foreign Relations has a security tracker for Nigeria with more information here.

This and much more available at aiddatachina.org, AidData‘s new source for data on Africa-China relations. It’s brilliant.

Maybe not. Foreign Policy has a fascinating (if alarming) piece on the quality of statistics in Africa. We could expand the analysis to other developing countries as well.

Upon achieving statehood, African states moved to expand their statistical capacity. They performed population censuses, business surveys, and agricultural censuses. But their ability to do this was hit hard by the economic crisis of the 1970s. The administrations faced large external imbalances, high rates of inflation and general shortage of funds which weakened government bureaucracies around the region, leaving many of them unable to measure their economies. Moreover, the statistical offices fell into further neglect during liberal policy reform that followed the economic crisis in the 1980s and 1990s (the period of “structural adjustment”).

Looking back, it seems odd that the International Monetary Fund (IMF) and the World Bank would have embarked on growth-oriented reforms without ensuring that governments had the tools to reliably determine whether their economies were growing or stagnating. For statistical offices, structural adjustment meant having to account for more with less: Informal and unrecorded markets were growing at the same time as the same reforms curtailed public spending. As a result, our knowledge about the economic effects of structural adjustment is extremely limited. The cumulative record of annual economic growth between 1960 and today, for African economies does not realistically show what happened with economic development.

The Health of the Nation
By Melina Platas Izama

Since Uganda hit 50 recently, it seems as good a time as any to check its vitals. There is the heartbeat of the economy and the temperature of the masses, the pressure of the politics and the weight of history. The health of this nation in one word? Resilient.

The Jubilee celebration was not made up of unfettered jubilation, as one might expect at 50 years of independence, but instead doused with a heavy coat of introspection.

The pristine Kampala Road, captured in black and white photos, is hardly recognisable today – a bustling, grating and downright stressful stretch of earth.  Cynics wandered and wondered aloud, are we better off now than we were a half-century ago? Teachers are striking, projects stalling, health clinics leaking staff, money, and drugs. This version of events is familiar. We listen to it every morning and read it every day. Frankly, it’s exhausting.

The health of the nation is in part a function of the health of its people. And here we have some great stories to tell. The greatest story of all is the about the survival of children. In the last fifteen years, death in infants and young children has fallen by nearly 40%. The drop in child deaths was faster in the past five years than it has been in decades.  This is fantastic news.

When Uganda raised her flag for the first time, mothers across the newly birthed state could expect more than one in five of their children to perish before age five and 13% of newborns would not survive their first year. This year, as the flag was raised once more, the death of a child is not foreign, as it should be, but neither does it go hand in hand with motherhood.

The results of the most recent round of the Demographic and Health Surveys (DHS), which have been instrumental in documenting these trends, have just been released for Uganda. Conducted across the country in more than ten thousand households, the DHS has been conducted in 1988, 1995, 2000, 2006 and 2011. While there are a number of improvements to report, the story of child survival, particularly in the last decade, stands out. It is perhaps the greatest achievement of the new millennium in Uganda. END_OF_DOCUMENT_TOKEN_TO_BE_REPLACED

West Nile virus, that is. A widespread outbreak in the U.S. has attracted renewed attention to the virus, which acquired its name from West Nile, Uganda, although there is no evidence that it originated there. Unfair, isn’t it? The virus was first isolated in Omogo, West Nile district, Uganda, in 1937, by researchers at the Yellow Fever Research Institute, then based in Entebbe. According to a 1940 article by Smithburn et al. in the American Journal of Tropical Medicine and Hygiene:

In attempting to isolate virus numerous persons were seen who were suffering either from an illness suggesting yellow fever, or from pyrexia of unknown cause. From many such persons blood was drawn, and as soon as possible thereafter the serum was in oculated intracerebrally2 into mice. Subinoculations were done from mice which became ill. In this manner several transmissible infective agents were isolated.

The purpose of this paper is to report the isolation of one such agent, which we call the West Nile virus, and to describe some of its properties. Although this virus was isolated from the blood of a human being, the circumstances of its isolation were such that nothing is known regarding the illness produced by the virus in the human subject.

That the virus was identified in West Nile should, if anything, be a testament to the medical contributions that have been made from the region, but it is more likely to have inspired notoriety. West Nile virus outbreaks have occurred all over the world, but the virus was not identified in North America until 1999.

West Nile virus is carried by mosquitoes, which acquire the virus from infected birds. In rare cases (only about 1 in 150 cases), severe viral infection is characterized by “high fever, headache, neck stiffness, stupor, disorientation, coma, tremors, convulsions, muscle weakness, vision loss, numbness and paralysis“, according to the CDC. Up to 80% of those infected, however, do not experience any symptoms.

Current map of West Nile activity in the U.S.:

I won’t regale you with tales of my Stata/R crises (read: extreme and futile frustration over code), but I really loved this xkcd post (h/t @laurenrprather). The funniest things are those that are true, and hearing them makes you realize you are not alone in your absurdity.

Was me! Well, roundabouts. What number were you? Find out here on the BBC website. (h/t @slate). There are over 2 billion more people in the world today than when I was born.

I’ve been looking at the 2011 Ugandan presidential election data on voter turnout and support for Museveni by district. The trends mirror those in the 2001 and 2006, which I reported on in the Independent, and which Elliot Green also examined in his post-election blog post.

Voter turnout appears to be higher in districts that have greater support for Museveni. This relationship appears robust across the past three elections and even within regions. The question, of course, is what explains this trend? Is it that NRM is better at getting out the vote in it’s strongholds? There is more rigging going on in NRM strongholds? Opposition is apathetic and feels their vote won’t matter, so they stay home on polling day? Other ideas? I’m currently brainstorming ways to test these explanations, which are not mutually exclusive. Any and all ideas welcome. 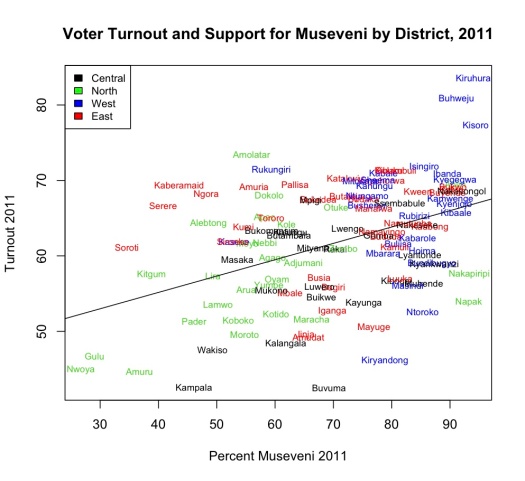