Dr. Kizza Besigye was finally allowed to fly to Nairobi to seek treatment for his battering yesterday at the hands of (flower-print shirted, h/t Rosebell) plainclothes state security operatives. NTV has footage of his departure:

I am very glad Dr. Besigye was ultimately allowed to fly (@AndrewMwenda suggests maybe he needs to invest in a boat now that walking, driving and flying are forbidden), but let’s remember why he needs to go to Nairobi in the first place (apart from his brutal treatment). There are no hospitals in Uganda that come close to rivaling the best of those of Kenya or South Africa. Those who get care in Mulago or IHK are the luckiest.

Beyond the overburdened national referral hospital and private hospitals (the latter of which are impossibly expensive for most), the health sector in Uganda is in a pathetic state. Health worker absenteeism, drug leakage, and even ghost clinics are rampant. A 2007 survey found that only 6% of Uganda’s hospitals had the basic infection control elements (soap, running water, latex gloves, etc.). 1 in 8 children will not live to see their first birthday, meaning that nearly 500 of the 4000+ born each day will have died within the next five years. Maternal mortality has not improved by any statistically significant amount from 1995 to 2006, when the last Demographic and Health study was completed (Uganda DHS 2006 pg.282).

The failures of the health sector are to a large extent, a failure of governance.

Yes, it is terrible that security forces attempted to stop Besigye from seeking the medical treatment he so desperately needs and deserves. It literally added insult to a horribly unjust injury. But even more terrible is that Besigye is only one of millions of Ugandans who desperately need quality health care. And most aren’t getting it.

Kizza Besigye was today arrested again, this time even more brutally than the last.

Many claim that Museveni has now lost it — this is the kind of brutality not seen since the days of Amin. But back then, such things were whispers in the dark, rumors you hoped weren’t all true. Today they are broadcast far and wide for all to see.

But if the state (read: Museveni) appears in disarray, so too does the movement opposing it. Anger, not vision, drives people to the streets. Not one Uganda, one people, but one Besigye who has been brutalized. The campaign is still more anti-Museveni than pro-anything.

The problem is that this bus is unmanned, and traveling at high speeds. Which exit will Uganda take? Ordinarily one could try to predict the outcome by the relative organization of either side — Museveni or Besigye/opposition. But disorder and chaos abound on both sides. Thus, the outcome is to a large extent vulnerable to random chance. An accidental gunshot, a careless arrest, a viral video. All these can send the unmanned bus veering off wildly. Who will grab the wheel then? 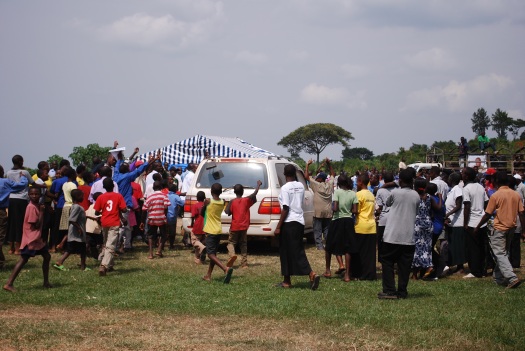 Above: Besigye arrives in Kanungu

Above: Besigye addresses his supporters in Kanungu

Above: Museveni’s rally in Lwengo, Central Uganda on February 10, 2011

I’m in Masaka today, a small town 2 hours southwest of Kampala,  following President Museveni’s campaign. This is a small and quiet town, but from the hotel in town I can hear a lot of hooting and shouting — it’s possible Museveni’s convoy has just arrived. He has won this central region district in past elections, winning about 64% of the vote in 2001 and 59% in 2006. The urban areas, namely Masaka Municipality, tend to vote for Kizza Besigye, the main opposition candidate for the past three elections. But the rural areas are pro-Museveni.

In all likelihood Museveni will win again here, and win big.